Each year thousands of California’s youth experience the reality of displacement from their homes. Unfortunately they’re often labelled, misunderstood, overlooked, and underserved.

KYJO is a Level 14 Short-term Residential Treatment Program and Foster Family Agency providing a structured, family-like atmosphere with the aim to develop positive coping skills, while offering the guidance and resources needed to give these kids a real opportunity to thrive and succeed in life.

Our unique approach has allowed us the privilege to see the youth we serve flourish and become productive members of society. We give hope, because we see value. Our mission is to Keep Youth Journeying Onwards.

KYJO Enterprises, Inc. opened its first residential youth home in 2007 in Hanford, California and expanded to six homes throughout Fresno and Clovis within the following two years. Roots were planted in June 2012 for KYJO Foster Family Agency, through which additional children will receive quality care and a more promising future. 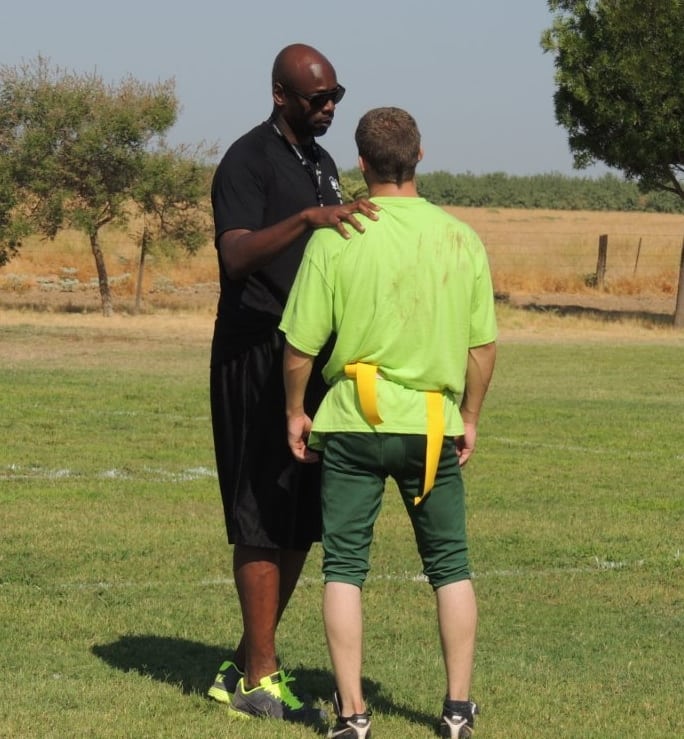 Kevin Jordan, Executive Director and founder, is a graduate of California State University-Fresno with a degree in Business Management and a member of Alpha Phi Alpha Fraternity, Inc. While at Fresno State, Kevin was a standout offensive lineman whose talent led to a professional football career for the NFL’s Green Bay Packers and the AFL’s San Jose Sabercats. Forced into early retirement due to injury, he went to work as a Group Supervisor at San Mateo County Probation Department in the juvenile hall. While working at juvenile hall, Kevin was inspired to devote more of his time to helping troubled youth. He then founded the 501(c)(3) non-profit organization Keeping Youth Journeying Onward (KYJO) Residential Youth homes, through which he has been able to successfully touch and influence the lives of many young people.

Growing up, his father was a tremendous influence and great role model in his life. Kevin was raised in a very tough area of Los Angeles and was exposed to violence at a very young age. Despite the odds against him, Kevin’s father, who was a Youth Counselor for California Youth Authority, was determined to have his children succeed. He did not want to see them meet the same fate of the other kids in the neighborhood who turned to gangs, drugs, or a life of crime. Kevin’s experiences growing up allow him to relate to the youth in his care first hand. He attributes his success to having parents who taught him to be accountable for his actions, were tough on him when they needed to be, taught him to never give up on anything in life, and who he knew they genuinely cared for him. All of these are things that he now practices with the youth in his care.

Kevin strives to show youth in his care a different way of life. If kids are exposed to different things outside of what they’ve only known, it promotes change. Most have never had people in their lives that have truly cared or kept promises made to them, but at KYJO we do and keep them journeying onward!

The People that Make It Happen

I just wanted to say that being in placement we are usually under the gun when trying to find suitable placements for our kids.  I really appreciate the fact that you folks respond to our inquiries fairly quickly.  I was talking to a SW who had a child placed with you and the fact that your program really tried working with him to engage him in services.  Keep up the good work.

I love you guys. You have had about 5 kids of mine in the last 3 years. I love the way the program works with the kids on an individual basis. I am always telling other workers to call KYJO for openings.

The staff has always been very welcoming and helpful I have never had a problem with anyone. You have always assisted me in transportation and I really appreciate it. I look forward to working with you in the future. You guys rock!!!

What I love most about KYJO is the true passion that is brought to bear for the benefit of the KYJO kids on a daily basis. Many of the KYJO kids have never been exposed to real role models. KYJO teaches life lessons that will enhance lives for many years to come.

What makes KYJO unique is simply an understanding of the needs of today’s youth. KYJO educators often share their own life stories, obstacles and triumphs over adversity in order to teach the skills that will enable challenged youth to turn their lives around and achieve their goals and objectives. This is a priceless gift with profound , unique and lasting impact.

I admire KYJO’S team spirit and willingness to make a difference in the lives of the youth this organization serves. Through leadership and the desire to teach, KYJO has become a consistent staple of excellence in the community. The common theme of the organization is teamwork and hard work, and with both KYJO has been able to make the dream work to reshape and recondition each child’s mind equipping them with the tools to become a successful citizen in society.

KYJO, is unique because the organization takes a modern approach to modern problems. The leadership team is constantly brainstorming to find new ways to better serve their residents. KYJO also allows the residents to have a voice, which keeps the dialogue open between resident and the leadership team. KYJO empowers their youth by teaching them to be self thinkers, self motivators and to be selfless.

I like the people of KYJO that I work with and the work environment I work in, because it allows me to express my own ideas. I also like working with the residents and making changes in their life. KYJO is a well-rounded program. It not only tries to help the resident at the root of the problem, but also helps them to move forward.

What I love about KYJO is the demands and expectations that is expected of staff and residents. Activities and the variety of programs that KYJO offers sets us apart from other agencies in California.

The thing that I love the most about KYJO is the pride I feel being part of the team. Not all people can say that they are “proud” of the organization that they work for and the work that they do. I truly feel that KYJO makes a difference in young lives and dedicates its work every day to making our community a better place. It often feels like an uphill battle and that we play an under-valued role in society, but it is unquestionably important work that we do.

The staff at KYJO sets us apart. From the Board of Directors and Executive Director position all the way through the Maintenance Department and Direct Care Staff, each employee holds a special place in their hearts for the youth that we serve. KYJO doesn’t just give youth a roof over their heads and food to eat, we give them hope, life skills, a safe, nurturing and educational environment, and lots of opportunity to experience things/activities that they may never otherwise be able to experience. We actively seek ways to broaden perspectives, teach a different way of looking at people and situations, and instill self-confidence and worth. It is definitely NOT just another group home.

What I love most about KYJO is the people who put endless amounts of effort into making a difference in the lives of our youth at KYJO. Whether it be management, therapists, or staff- we all want to accomplish one goal and that goal is for these young men and women to leave KYJO with a different mindset and attitude that will gear them towards a more positive outlook on their future.

I think diversity is really expressed here at KYJO. There are people who have come from a wide range of background, walked different paths of life, and are now working together sharing the same passion in keeping the youth journeying onward. All the different experiences, knowledge, and skills are what truly makes KYJO unique.

KYJO provides me with the opportunity to impact the life of these kids every day. The various personalities of kids are what make the job enjoyable. To witness their transformation and growth while in the program, is an amazing thing to see. KYJO is unique because of the care that they have for the kids. From the top and throughout the day to day staff, the amount of care and mentorship shown for the kids is unparalleled. They take the time to ensure that every child has the opportunity to excel at their own personal interests and teaches them that there is more to life than what they have previously been exposed to.

KYJO is an organization that has a GREAT ability to learn, and translate that learning into action rapidly, which is the ultimate competitive advantage. There are not many organizations out there teaching our Youth self-confidence & this is by far the most important thing that KYJO can do. Because then they will act. The team with the best players wins.

I love that KYJO provides many opportunities for staff and residents alike to attend amazing outings and activities, some of which may be first experiences for both staff and residents. Compared to other group homes, KYJO gives back to not only the residents but to the community as well. Recently we have been working with Live Again Fresno handing out food, providing blankets, etc.

KYJO gives kids a chance to become successful with the proper guidance from leadership that truly cares. From the top down, all the people involved in the organization want to give the kids the best chance to succeed. It is their goals to help the kids become successful that drives KYJO to be the best in their industry.